This is Part 4 of several. Start at the beginning.

I had some ideas about Deep Synth. I wanted to be able to play several different notes, and I had the idea that after a note, the sound should revert to chaotic buzzing.

At first, Deep Synth was monophonic – whichever note was triggered last was the note to play. On a Note On event, each oscillator’s target frequency would be set to the note’s frequency in one of several octaves. The code on Earslap distributed the oscillators across six octaves. Then the frequency would drift toward that note over several seconds.

There are ten buttons on the 1UP’s gamepad. Which buttons should trigger which notes? Eventually, I realized you can sort of conceptualize the buttons as being in the shape of a piano keyboard. (See below.)

I also thought it might be fun to have the octaves weighted as pseudo-Shepard tones. That way there wouldn’t be a single deepest note.

It would be good to have a full 12 note chromatic scale with Shepard tones, then Deep Synth could play “all” notes. (All notes that lie on the chromatic scale, that is. Exotic tunings need not apply.)

So I needed two more buttons, and I settled on the volume buttons. The new audio output section doesn’t use them, so they are available, just inconveniently placed.

So this is how I mapped the chromatic scale onto the gamepad. Several months later, I’ve fooled myself into thinking this is a natural layout.

I also imagined it would be interesting to have individual oscillators wandering around a bit when notes changed. So I made it so that on every half step, most oscillators would move up, but a few would move down to the lower octave. This would be the basis of the Shepard tones.

I prototyped an algorithm in a Jupyter notebook. The graph shows how the oscillators move when playing a 19 note ascending chromatic scale. At each step, one or more oscillators drop down an octave. And you can see that the pseudo-Shepard weighting is maintained. The octave assignment code was heuristically created – there’s no deep theory there. 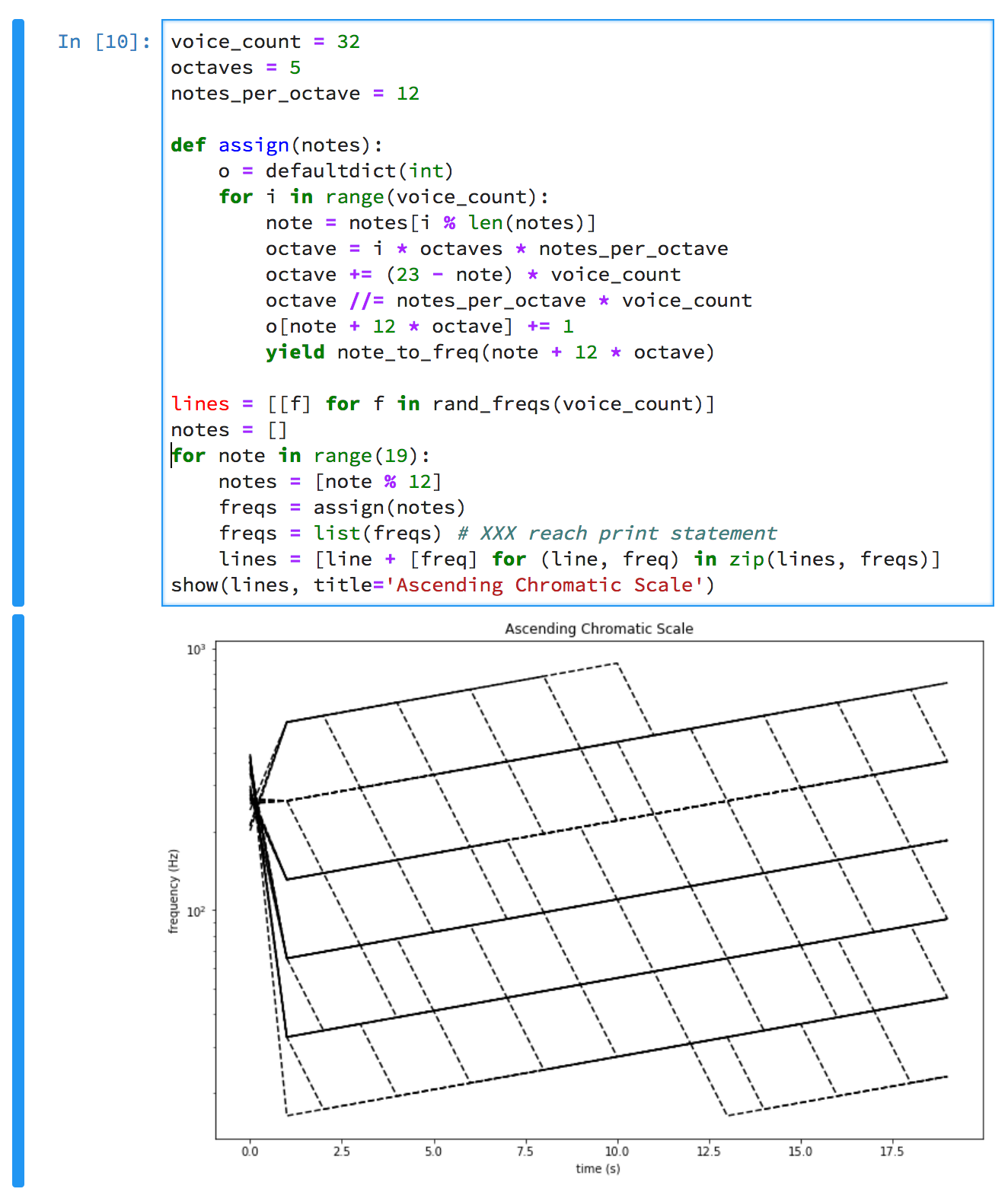 The next question was, what happens when a note is released? I went through several iterations on this code. It will get trickier when Deep Synth becomes polyphonic (foreshadowing!) but for the mono synth, it’s pretty straightforward. The chaotic buzzing frequencies are always generated, but when the oscillators are focused on a note, the buzz frequencies are ignored. When the note is released, the frequencies gradually start drifting back. I made the drift start very slowly – it takes a second or so to realize the note is dissolving. I like the effect, but it is definitely an acquired taste.

Finally, the first note takes several seconds to focus, but it’s hard to play an instrument that’s always that laggy. So if you trigger a new note before the previous note has completely defocused, the new note focuses faster.

That wraps up monophonic Deep Synth.