This is Part 5 of several. Start at the beginning.

I wanted Deep Synth to be polyphonic. So I started planning how to share voices among notes. My goals:

Let me explain the wandering oscillator effect. Deep Synth should have no lowest note, so it assigns voices in a pseudo-Shepard tone way. No note should be strictly lower or higher than any other note; the oscillators should be moving both up and down on every transition. I went into more detail in the previous post.

Again, I prototyped it in Jupyter notebook. Actually, you can see that I’m using exactly the same code to assign voices to notes. That’s because I’m fudging: I backported the new algorithm into the mono simulation to ensure it still works there. I don’t actually have a record of my Jupyter notebook before polyphony worked.

The graph shows the notes of a D minor 7th chord being added one at a time. At t=0, the voices are buzzing chaotically. At t=1, they are playing D in six octaves. Then F is added, and At t=2, half the voices have moved to F. At t=3, the voices have redistributed to D, F, A. And finally at t=4, we have the whole chord: D, F, A, C. 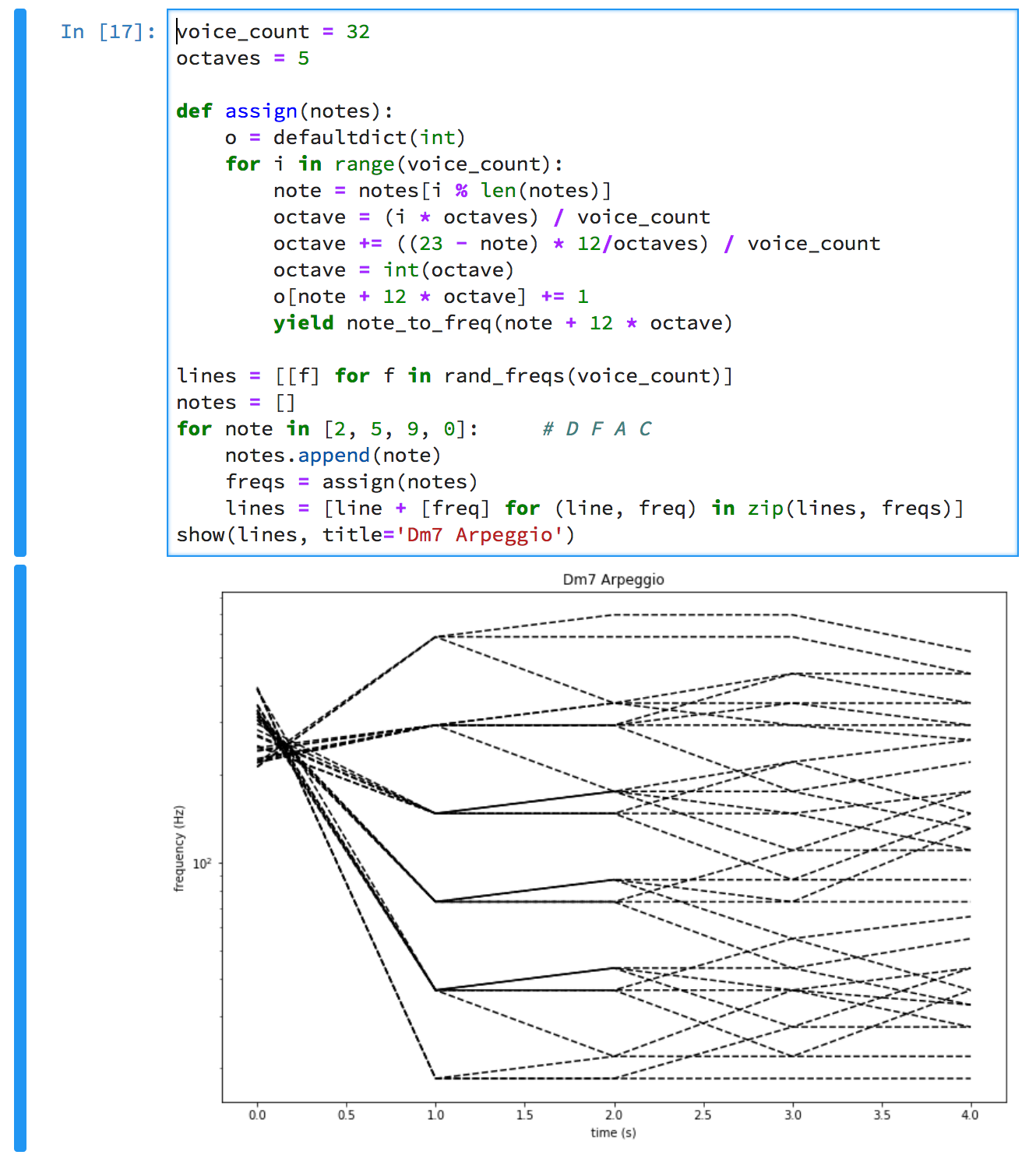 You can see that at each transition, voices are sliding both up and down.

There are 20 different notes in the final chord! It’s a deep chord [sic]. The magic of Shepard tones is that there is no definite bottom note. This chord is root and all three inversions, open and closed voicing, all at once.

But it still wasn’t right.

It’s easy to say, “voice should slide from this frequency to that”. But the way it slides is also important. After trying several things, I decided I wanted these properties:

I eventually came up with this mental model. 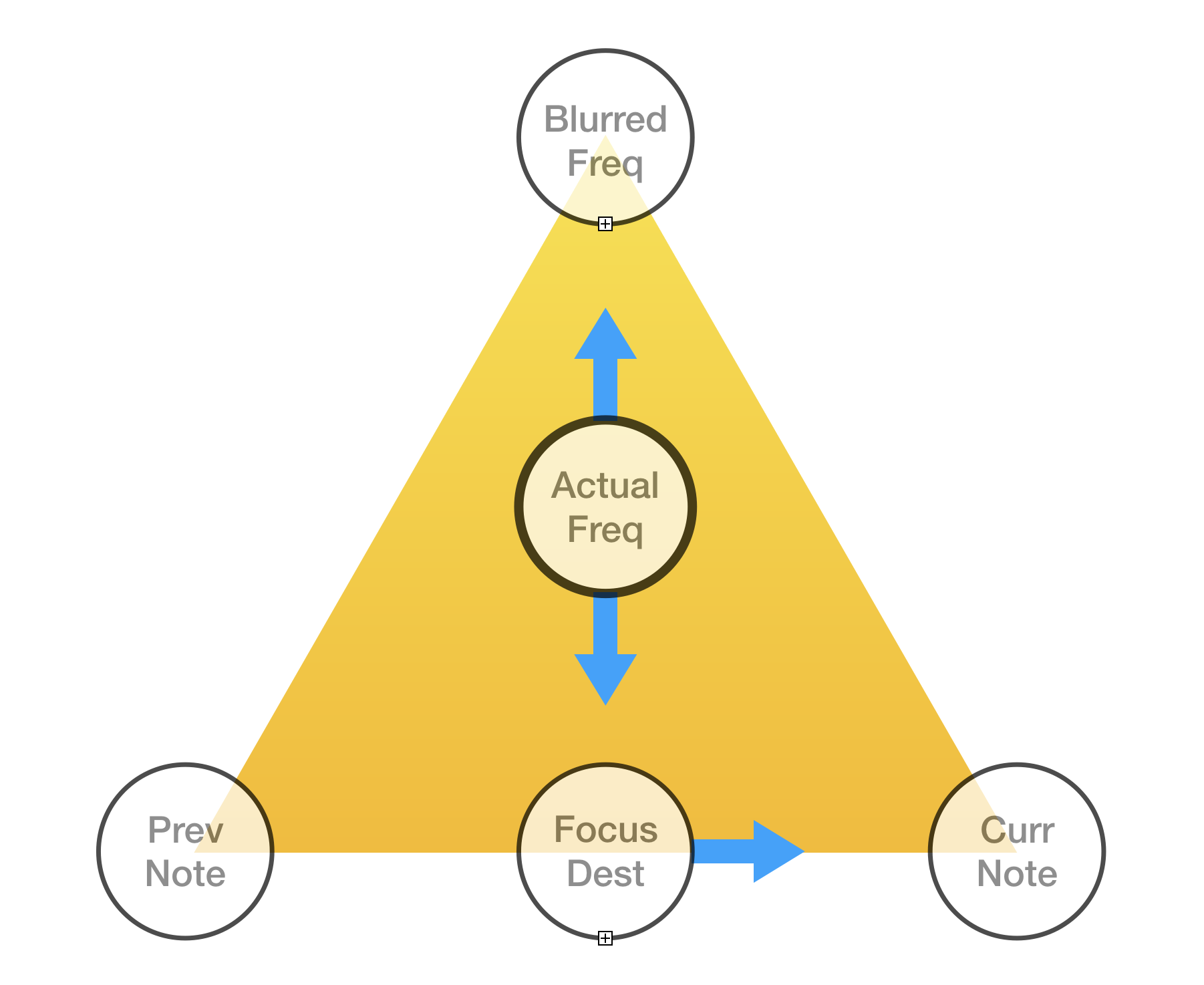 Here is the code to do that calculation. sweeper_interpolate interpolates between 0 and 1 along an exponential curve; see below.

That’s not a very good explanation. Here’s the relevant source.

I wrote a “class” called sweeper that interpolates along an exponential curve. It’s designed to be fast to calculate and easy to use.

I made another Jupyter notebook to understand exponential curves. (I love Jupyter notebooks. They are great if you think visually.) This one has explanatory text, so I’ll just paste it verbatim. 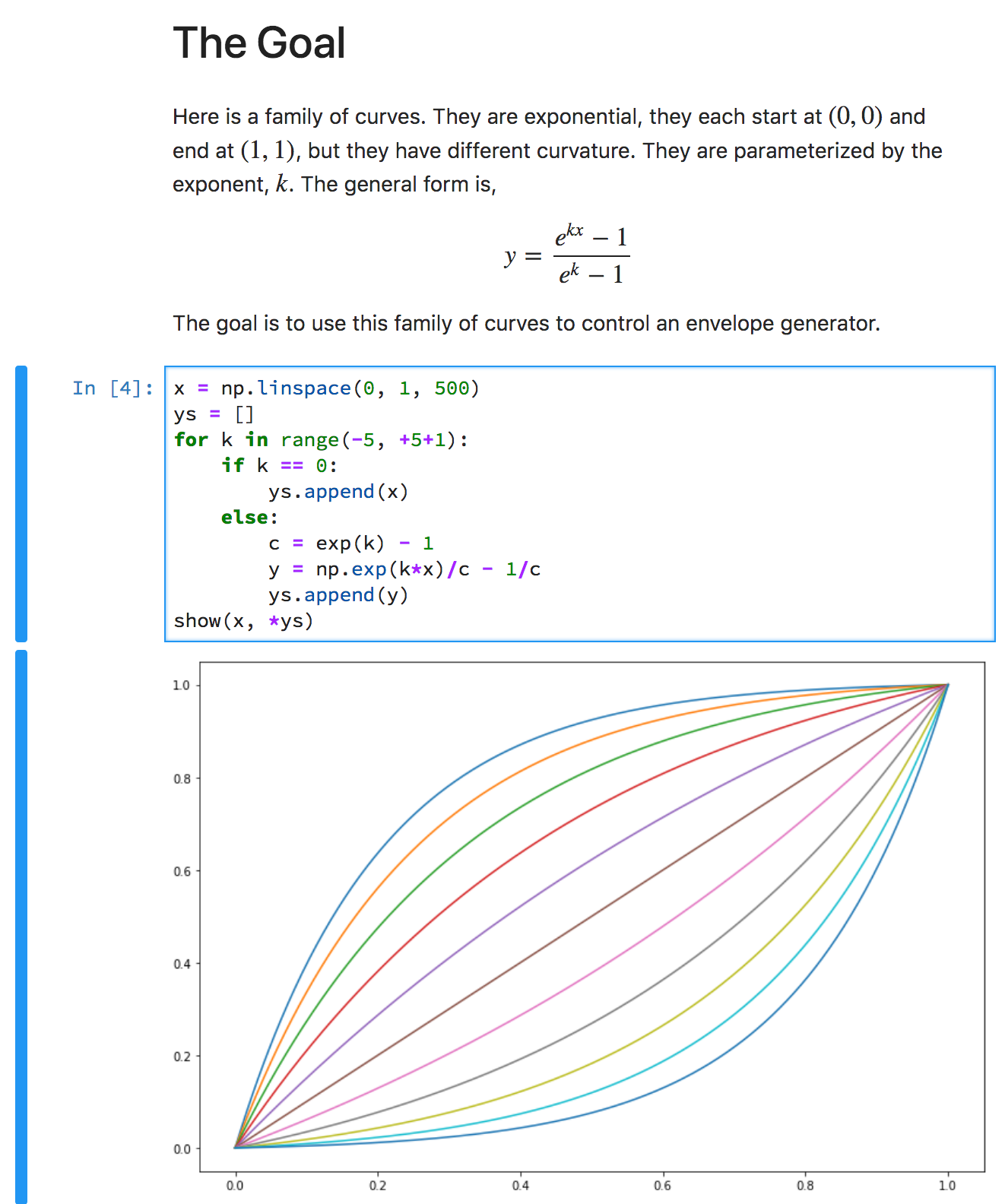 It’s a nice curve. You can start out slow and get faster, or start fast and slow down, and that’s independent of the total time or distance. You can scale x and y to the actual time and distance needed.

And it’s fast. Here is the code to increment position along the curve. (sstate points to the sweeper’s mutable data.)

You can find the complete implemention in synth.c. Look for things with sweeper in their names.

For each voice’s horizontal and vertical sweepers (slide and focus), I used a random curve with 3≤k≤5. Those start slow and end fast.

Share:
Deep Synth: Playing Notes LED Cubes — Mine and Others